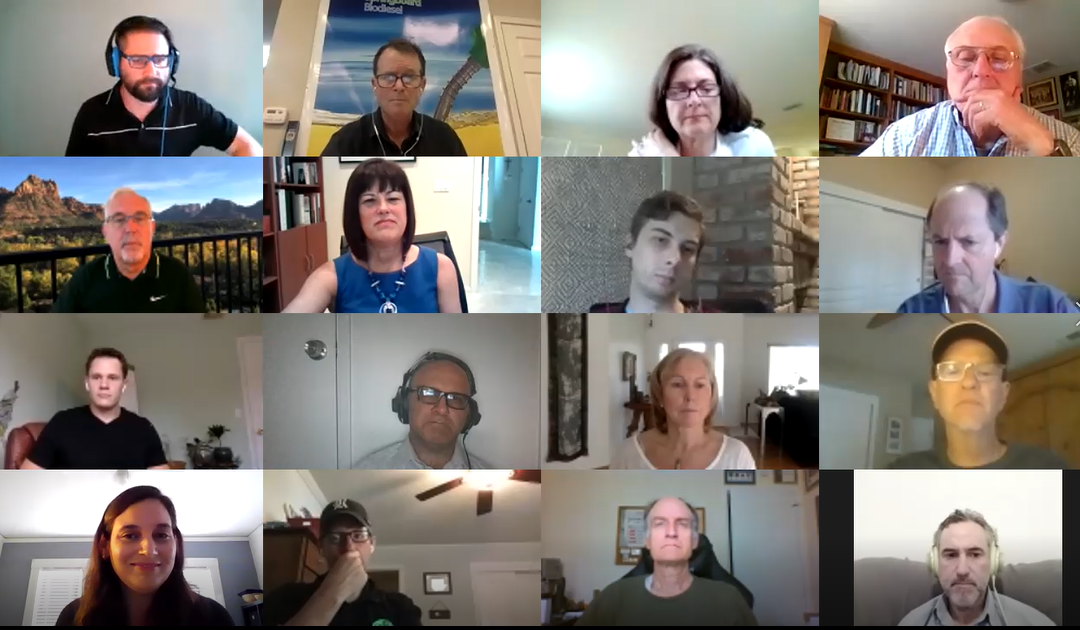 Last night (April 30) we turned our usual monthly MeetUp into a Zoominar.  We didn’t know how that would work out, since one of the most attractive features of these meetings has been socializing and networking, not to mention the food!  Maybe no surprise to you veterans of Zoom, but we had over 110 signups and most of those attended.

We put this meetup on in collaboration with our sister organization AgStart which has wonderful offices in downtown Woodland and plans to add wet lab space and more offices.  Congratulations to John Selep and Leanna Sweha, and thanks for joining for this MeetUp.

The theme of the event was taking the pulse of the waste conversion companies in our region since we last heard from them.  We had four presentations all of which produced some surprises.  Prof. Farshid Zabihian updated us on the upgrades he has done on their small (20 kW) test bioreactor at Sac State.  This is turning into a great teaching tool for his mechanical engineering students.  They are getting into reaction kinetics, feedstock flow, more monitoring, and more controls.  Pretty impressive what has been done in the past two years.

Michele Wong told us about the continuing plans of Clean World to add anaerobic digesters in the state, based on Prof. Ruihong Zhang’s two-reactor design out of UC Davis.  Right now they are installing and upgrading systems in Southern California for Organic Energy Systems.  The planned input is 200 tons per day—larger than they have attempted before.  The most interesting point was that the unit has a liquid discharge which if untreated was resulting in huge sewerage charges.  The plant in Sacramento was incurring a bill of $60,000 per month.  Now CleanWorld is filtering the discharge and creating a “bio-ammonia” fertilizer product they can sell for a good price.  That is what could markedly improve profitability.  Way to adapt!

Matt Roberts of Springboard Biodiesel talked about their small cooking oil conversion units, which have now been sold not only in the US but overseas.  Their idea is to make the units compatible putting them near sources of used vegetable oil, avoiding the cost of collecting the used oil and bringing it to a central location.  Where is one of their most profitable installations?  Bagram Air Base in Afghanistan.  It is replacing conventional diesel that due to the cost of air shipping it in, or bringing it in armored convoys is hugely expensive.  On a smaller scale, similar cost savings are driving much more customer interest.  Matt said the estimated cost of a gallon of biodiesel from his unit was $1.06 per gallon.  Compare that to the best recent price of diesel of $2.69 I have seen.  They are gaining traction by word of mouth sales and doing pretty well for five guys in Chico.

Meredith Roberts of Sierra Energy told us that while things are relatively quiet now with the lockdown, Sierra achieved a big milestone in getting $33 million in funding in 2019.  The hope was that would allow them to put the pilot unit at Fort Hunter Liggett into some long-term testing to see how the refractory lining held up under the high temps inside, among other things.  Sadly, just as they were getting going on that, the virus struck.  They are doing some testing and a little redesign at this point, but they have a clear path to customers, with thousands of serious buyers on tap, and progress to the design of their 50 ton per day first commercial unit.

While a virtual conference of dozens is not ideal for getting audience participation, we had a pretty good system of collecting questions in the chat space and relaying those to the presenters.  Thomas also had a couple of surveys done on the fly to get some discussion among participants.  Everything worked well we are sure to do this again while we remain sidelined.  But all of us, including you, will be very glad to get back to doing these in person so we can mingle, eat, and drink like before.

But if you missed it, you can still watch it below!

Be sure to take a look at applying for our CEO Crash Course held in 8 two-hour sessions throughout June.  It also will be virtual.  We have an all-star line up of instructors and speakers.  It’s free, but requires a refundable $200 deposit to hold your seat.  Apply for your seat by filling out a short application telling us more about your concept and your company.  Learn More and Apply Now!

Continue to join us for our weekly short “To-Do” sessions providing you quick insights on what others are doing and what else is happening in the clean tech community while we are at home.  You can find out the schedule on our website and subscribing to our newsletter.