Recently we had a chance to catch up with Leila Madrone, founder and now CTO of Sunfolding, the winner of the CleanStart Prize at the Big Bang in 2014.  Leila and her colleagues had come up with a very clever way to move solar panels so they were pointed as directly at the sun as possible throughout the day.  This increases the amount of energy production from a solar installation. She did it not with gears and chain drives as most had done, but with little airbags (see photo).  By doing so, she eliminated a lot of complexity and cost, making the device easy to install and operate—and with a high ROI.

Since then, Sunfolding has gone on to success after success.  She won an Edison Innovation Award in 2014, won a $2 million SunShot award in 2016 from ARPA-e, was selected for a $1 million award from the CEC to install the system on the 300 kW rebuild of the PVUSA project in Davis, won Best New Venture at the 2018 NREL Industry Growth Forum, and late last year got a contract to outfit a 39 MW system in the state, their biggest project to date.  Sunfolding now has a pipeline of over 60 MW of more projects on the way in the first part of this year.

In March, Sunfolding was among the top ten most innovative New Energy Pioneers selected by Bloomberg New Energy Finance (see article here).  There is a great article about her journey in building Sunfolding that just came out.  Also included below are some excerpts from other articles which give more details.

Sunfolding is a great success story of building a clean tech startup from modest beginnings and what persistence can do.  Be sure to come to UCD Alumni Center on May 23 (details here) to see the new cohort of Big Bang winners including the recipient of this year’s CleanStart prize.  We hope that winner will achieve as much success as Leila and Sunfolding. 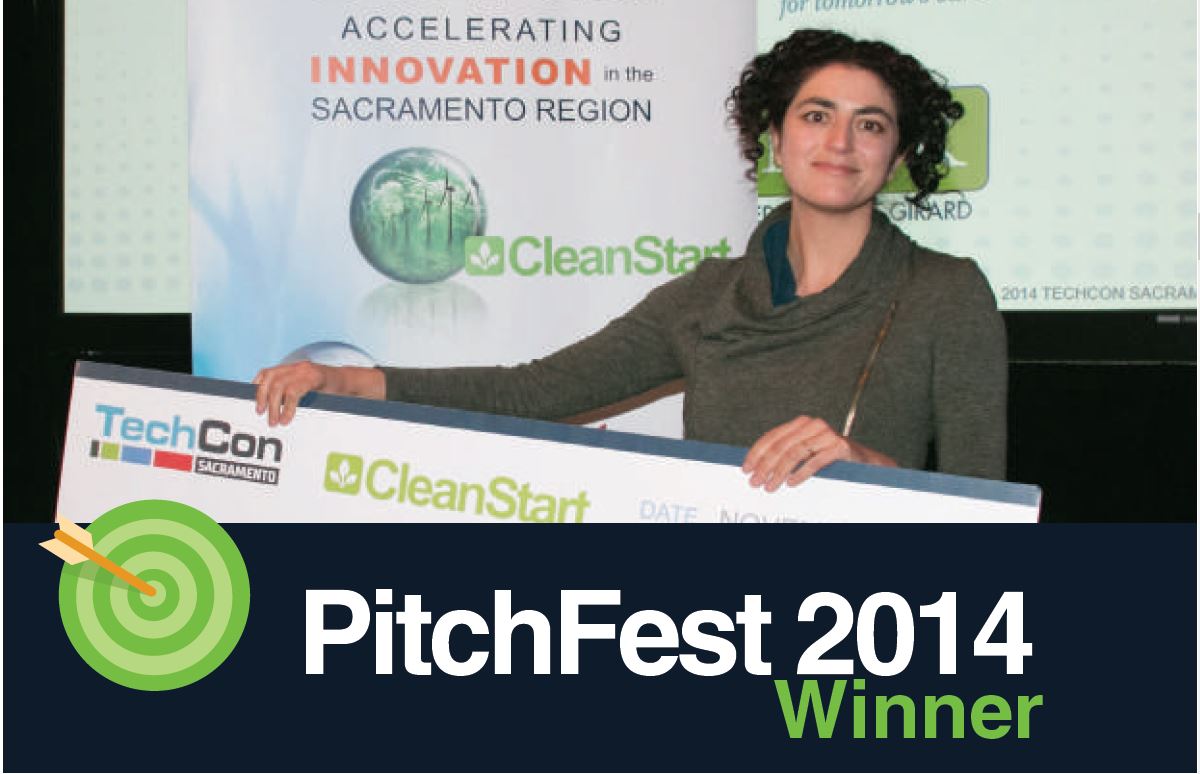 Solar trackers, which point a plant’s solar panels towards the sun as it moves through the sky, have made solar plants more efficient but have added a layer of complexity to plant construction and operation.

“Trackers changed that. They increased plant efficiency and the return on investment but that came with higher construction costs, more maintenance, more moving parts that could malfunction and more expense.”

By rethinking the way a tracker functioned so that it was moved by air rather than motors, Sunfolding reduced the machine that moves the panels in a solar plant to just one component, the AirDrive.

This increased a plant’s potential savings and yield and reduced the amount of labor needed in the construction and maintenance phases – one of the major factors in the overall cost of solar energy.

“We have made constructing a solar plant two to three times faster, and the maintenance requirements are essentially now no more than periodically changing an air filter,” Madrone says.

“These innovative, less complex solar trackers will play an important role in changing the equation so that constructing and maintaining a solar plant in the US can be cheaper than almost any other energy source.”

Stephan Feilhauer, a Senior Vice President at Macquarie Capital, says this has the potential to change the financial dynamics of solar energy.

“The design features pioneered by Sunfolding will help lead us to the next generation of solar, one in which we realize its enormous potential.”

Sunfolding to Supply Trackers for 39MW Solar Project in California

SAN FRANCISCO, CA, NOVEMBER 29, 2018 – Sunfolding today announced that the company was selected to supply its Sunfolding T29™ tracker for a 39MW project in California. The project is part of a larger portfolio with one of the top US EPC providers and adds to the rapidly growing number of utility-scale projects in which the Sunfolding T29 is deployed.

“We are pleased to see that word is spreading quickly about our installation speed, which is at least two times faster than traditional trackers,” noted Sunfolding’s CEO, Jurgen Krehnke. “As time is literally money in this case, installation speed makes a huge difference for our customers’ financial calculations. With simplicity and durability hand in hand, Sunfolding’s next-to-zero maintenance requirements will continue to create value during the lifetime of the plant. It is this level of systemic advantages that really sets our technology apart and drives fast adoption.”

The Sunfolding T29 uses proven technology and production methods from the automotive industry, and has three components, where traditional trackers have 21 or more. The simplicity of the solar tracker’s design means that project developers can reduce construction timelines along with associated labor and install costs. The tracker’s fewer components translates to high reliability in the field.

Sunfolding’s AirDrive actuator, assembled in Tennessee by Tier 1 automotive manufacturer Martinrea, is based on air-driven bellows that turn the trackers toward the sun, replacing traditional motors and large metal gear plates in other company designs. The system has adopted off-the-shelf components where possible, adapting truck air brake systems and working with DuPont to develop the bellows material. “The T29 uses proven technology and production methods from the automotive industry, and has three components, where traditional trackers have 21 or more,” Sunfolding says.

The company has filed for three patents on fluidic actuators for use in solar arrays, and has pioneered the bellows application of the material provided by Dupont Performance Polymers. Dupont became a strategic partner in 2015, advising on material selection and manufacturing, utilizing its expertise in long-lifetime, harsh environment applications like automotive and marine, the company says.

“Their technology approach employs centralized fluidics to actuate the trackers while meeting or beating the tracking accuracy of distributed mechanical motor-based systems. The fluidics approach allows the system to be modular, reducing the costs of site excavation and leveling,” according to an ARPA-e summary of the Sunfolding research project it funded.

One benefit of the T29 design is a shorter installation time, which can reduce construction crew size by one-third. “The simplicity of the solar tracker’s design means that project developers can reduce construction timelines along with associated labor and install costs,” the company says. Time trials on the tracker demonstrate that it can be installed in one-third the time as traditional trackers, the company claims.

“We are pleased to see that word is spreading quickly about our installation speed, which is at least two times faster than traditional trackers,” noted Sunfolding’s CEO, Jurgen Krehnke, in an announcement on the latest California project.

Sunfolding’s SunShot award from DOE amounted to $2 million in 2016, aimed at component cost reduction of the bellows technology. “The key is a distributed, mass-manufactured drive system with shared control. This tracking system opens up new opportunities to significantly reduce component costs, improve efficiencies in construction and site design, and improve long-term reliability for all tracking solar projects,” DOE says. “This project will build upon the demonstrated technical successes by applying advanced U.S. manufacturing and automated assembly techniques to achieve significant cost reductions,” the department adds.

The ARPA-e project brief says, “Tracking subsystems were set up and subjected to harsh environmental testing to ensure reliability over the anticipated 30-year lifetime of a PV plant. The tracking system passed the durability testing including simulated wind and snow loading and harsh-environment cycling.”

“Following several design revisions to the bellows and component-level durability testing, the team implemented a ~6 kW outdoor tracking array in Sebastopol, CA, to acquire outdoor test data on a fully-assembled system. This system has been tracking reliably since August 2015,” ARPA-e notes.

“The team was able to attract supplemental funding ($1 million) from the California Energy Commission to allow the deployment of ~300 kW of tracked PV in 50 kW phases in Davis, CA, with the first phase completed in July 2016. This project is further solidifying the reliability and durability of the tracking system while incorporating successive design optimizations in each stage to improve the ease of installation and repair in the field,” the agency summary says.

Sunfolding hired DNV-GL to perform a bankability study on the T29; a first draft was produced in August 2016. Field tests show that “the T29’s motor-free, wear-free tracker rows require minimal maintenance during the system’s operational lifetime and the tracker is showing a 99.9% uptime,” Sunfolding claims.

In May, Sunfolding received the Best Venture Award at the 2018 Industry Growth Forum, an event held by the National Renewable Energy Laboratory’s (NREL) Innovation and Entrepreneurship Center. As part of the award, Sunfolding will have access to technical assistance at NREL. This award marks the fourth major recognition of Sunfolding by programs under the US Department of Energy (DOE), the company says. In 2014, the team received an Edison Innovation Award for their work on the pneumatic tracker.

The 39 megawatt (MW) project is part of an unnamed engineering-procurement-construction (EPC) company’s portfolio of solar installations based on Sunfolding’s T29 tracker, the company says. A prior installation of Sunfolding trackers was announced in October for a 5 MW project in South Carolina that was scheduled to break ground in November. In August, another project was announced for a location in Georgia.