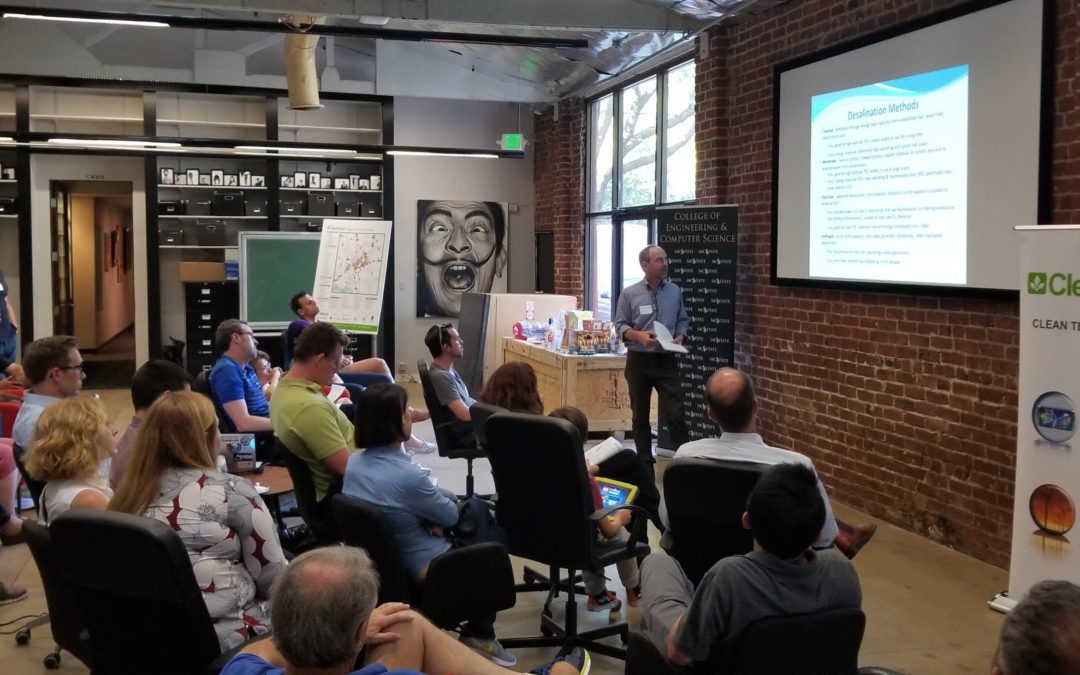 At the 5th Cleantech meetup of the year we moved from our usual focus on energy. About 40 attendees brought their interest in water conservation to hear from three presenters on sustainability of our water resource.

This is a bigger issue than many realize. The rights to use water in California were granted starting almost two centuries ago, and have been modified by statute and court decisions hundreds of times.  It is not treated like any other commodity. It is fought over fiercely. Because water has not been treated like a tradable commodity and priced appropriately in a market, there has been over consumption and no incentive to save.  This also is an issue for companies trying to reclaim water and sell it. Water is expensive to store and transport, so without a market price it is hard to justify reclaiming water from the brine of agricultural runoff.

Chris Peacock of AQUAOSO has dedicated his life to building the tools needed to facilitate water trading. He started his career in Arizona helping building their trading platform.  His talk detailed why California has a problem with “water scarcity, with low trust and high fragmentation.” He introduced AQUAOSO’s water platform as part of the solution, by connecting stakeholders to a water and data marketplace. It enables people to make money on excess water and reduce risk through market insight.

Peter Moritzburke’s experience in water desalination and treatment expanded on what is happening with runoff and the build up of 7 million tons of salt accumulation annually. He informed the audience on the several ways water desalination can work to reclaim runoff. Connecting the accumulation of sodium chloride and other chemicals to an annual loss up to $7 billion a year in agricultural productivity putting of 60,000 jobs at risk by 2030. Peter shared current solutions for water treatment to salt disposal.  Even highlighting that AQUAOSO’s solution is needed for justification and monetization of projects.

Attendees also got to hear from Athena-Intelligence founder David Sypinskie whose goal is to give people a better understanding of how resources are being used in agriculture and the effect it has on the whole system.  He has spent years collecting data from difficult sources to create body of knowledge that can then be accessed by AI to better understand the what effect farming practices can have on future years and crop yield.

It was an exciting event, make sure you make it to the June Meetup in Midtown Sacramento. On the 21st. We will have Eco Fitness hosting us and demoing their human powered Gym. We will be having HeliosAltas will be presenting.