Global Investment in Renewables Up Slightly in 2019 vs. 2018

“Investment in renewable energy capacity worldwide was $282.2 billion last year, up 1% from 2018’s $280.2 billion, with the world’s biggest market (China) slipping back, but its second-largest (the U.S.) hitting a new record,” according to a new report from Bloomberg New Energy Finance. A late surge in closings for big new wind projects was responsible for most of the gain:  “Looking at the overall renewable energy capacity investment figures for 2019, wind (onshore and offshore) led the way with $138.2 billion globally, up 6%. Solar was close behind, at $131.1 billion, down 3%.”

Investment in renewables projects in the US grew 20% to $55.5 billion.  A rush by wind and solar developers to qualify for federal tax credits that were due for scale-back in 2020 could explain the gain.

To read the full press release, including a link to get the full report, go here. 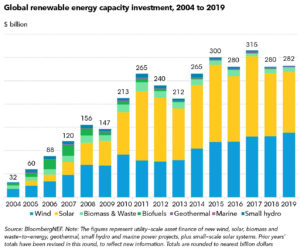