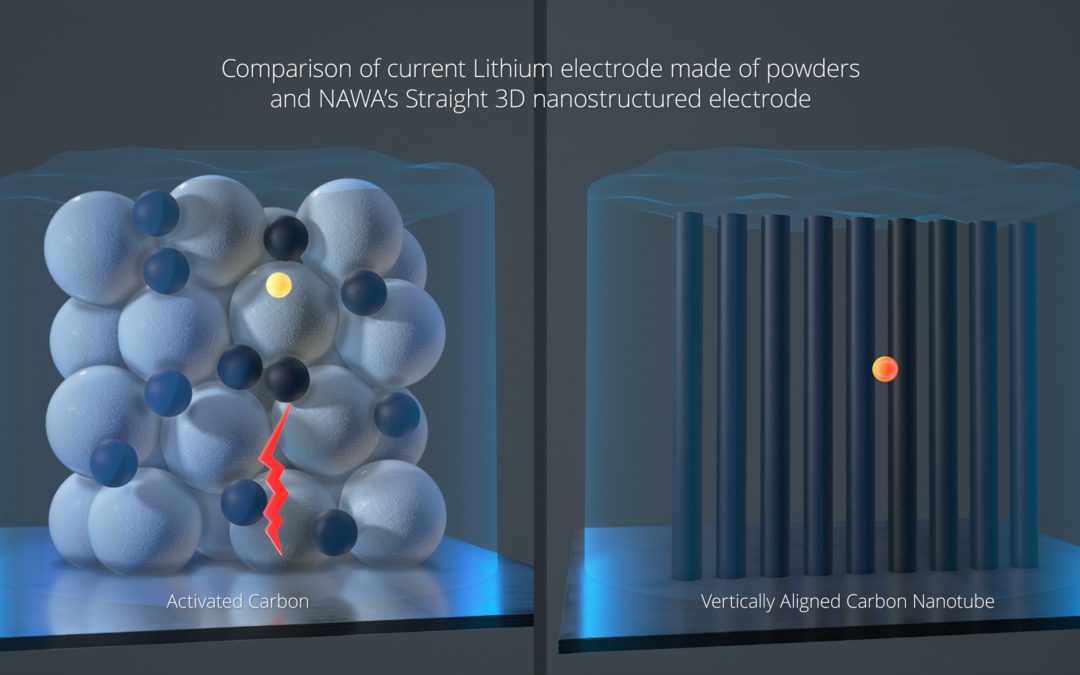 Based in Rousset, France, north of Marseille, NAWA Technologies just announced they had a new way of making carbon electrodes for lithium-ion batteries that would markedly improve their performance.   NAWA claims that their technology can improve power by a factor 10, energy storage by up to a factor of three, extend the lifecycle by up to a factor of five, and reduce charging time down to minutes instead of hours.  At the same, they claim they can make these superfast electrodes at the same or lower cost than current technology.  This is another in the series of dramatic advances in batteries that been quietly moving forward for years.  It is likely there are many more to come.

NAWA achieves this recent step by aligning the carbon nanotubes in carbon in a single direction, rather than the random jumble in ordinary carbon.  They do this with a coating process which they claim to have mastered and demonstrated on high-speed production equipment.  The electrodes will work on many battery types, not just lithium-ion.

NAWA is also working another breakthrough technology, not yet ready for prime time.  They are using a nanotube structure to overcome problems in substituting silicon for lithium.  That’s one to think about.  If the industry could move from rare, expensive lithium to ubiquitous silicon it could drop prices to the floor.  It could also lead to another doubling in energy density.  Those changes could open the door wide to replace ICE’s in propeller-driven planes, launching a commercial electric airplane industry.  Don’t underestimate how much better and cheaper batteries will get.

To learn more, read the news release from NAWA and this article from New Atlas.