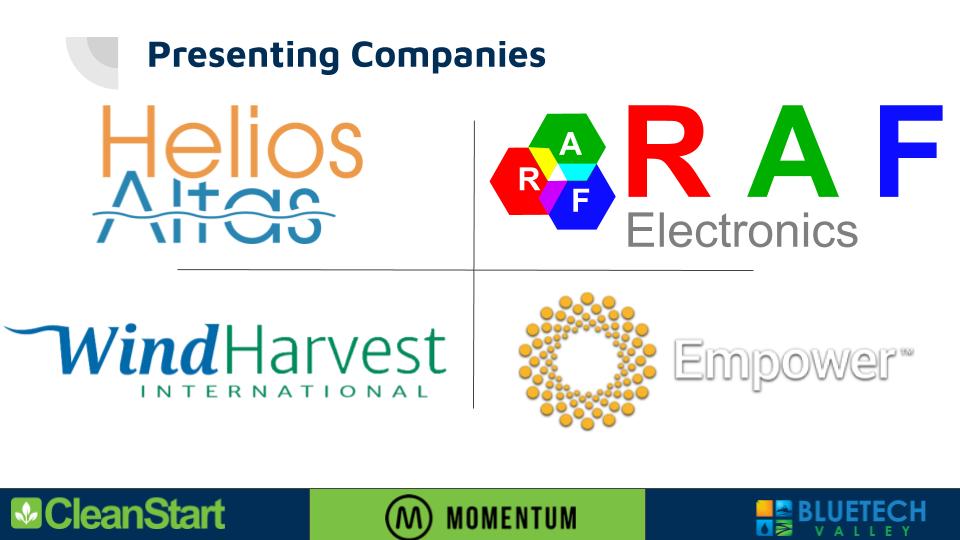 On November 12, we held the last Spotlight Pitch event of the year.  Over 70 people signed up.  The presenters made an extra effort to tune up their pitches and the result was some of the best pitches we have heard this year.  The videos of the pitches and the Q&A are available below.  You can review the quick version or the full version.  You should take the time to explore them.

Kevin Wolf of WindHarvest talked about his vertical axis wind turbine that fills-in on the used land between the big horizontal wind turbines and captures the near-ground, turbulent air that is missed now.  He has a lot of interest and in fact has raised his minimum amount in a crowdfunding campaign to order a prototype of his latest design, the one he thinks is ready to commercialize.  When manufacturing in volume, he believes his standard 70 kW machine will cost $1800/kW, which would be very competitive.  His unique turbine has been perfected through careful “aeroelastic” modeling and he believes that will be the key to his success.  He has gone through several versions with increasing success, but this latest one will be the real test.  He hopes to have results in 2022.

Ezra Beeman of Empower Energy in Davis reported on his latest 14 kWh home energy storage device.  Because his device combines several functions into one integrated unit, he believes his product will be the most cost effective and easiest to install one on the market.  He is looking to start sales in 2021.  Most of the questions were centered on whether he should raise more than the $1 million he is currently seeking.

Ever get annoyed at the glare from the headlights from on-coming traffic at night?  What if that could be virtually eliminated by tightly controlling the headlight beam to light the highway?  Dick Flasck of RAF Electronics showed off his latest version of his LED-based directional lighting product.  He thinks he may have cracked the code on solving the headlight glare problem with the bonus of saving two-thirds of the energy now used in the best LED headlights now used in vehicles.  In electric vehicles, that gain in efficiency would translate into greater range.  But that is not where Dick is starting.  He identified another market where he thinks entry is much easier—theatrical lighting.  In that application, his technology would reduce energy consumption 80% over the conventional incandescent lights (from 750 watts per light to less than 80 watts), and improve the quality of the lighting.  Disney is very interested in this for its cruise ships that have big theaters for live performances.  The lower power use also translates into cooler fixtures that can be put in more confined spots that the hot lights can not.  The theatrical lighting market is a lot bigger than most know, so he sees this as a good place to start to build his business while he works to get his technology qualified for vehicle use.

Michael Carroll of Helios Altas presented his very clever micro-hydropower generator, intended for remote locations where the water flowing in a channel or stream is only 15 cm deep.  Other microhydro units generally require several feet of water depth to work.  Micro hydropower is so challenging because most ways to tap it are so costly on a cents/kWh basis.  They require a great deal of civil works and the turbine-generator itself is heavy and expensive.  Mike has turned all this on its head.  His PowerWheel is lightweight, simple, and inexpensive.  Two people can install it.  The installation itself is simple and can be done without skilled labor.  It’s a little hard to describe but the best way to understand it is to look at the pictures on his website (https://www.heliosaltas.com/), especially the 5 minute video.  Once you see it, you get it.  He announced that Siemens has now agreed to partner with him and market the product through its channels.  That’s a big deal for HeliosAltas, so congratulations!  Mike has installations both overseas and in the US, so the product is getting a lot of attention.  The smallest unit has a 500-watt capacity, and the largest is planned to be 5-10 kW.  The individual PowerWheels can be ganged together in series in a water channel or in parallel across a stream.  And they can be moved to other locations if stream conditions change.  When you see it, you wonder, “Why didn’t someone think of this before?”  That’s a sign of a good idea.

Our next Spotlight Event will be next year, probably in March, so keep on the lookout for our announcement.  Be sure you subscribe to our newsletter.  It’s the best source to keep on top of cleantech innovation and startups in our region.