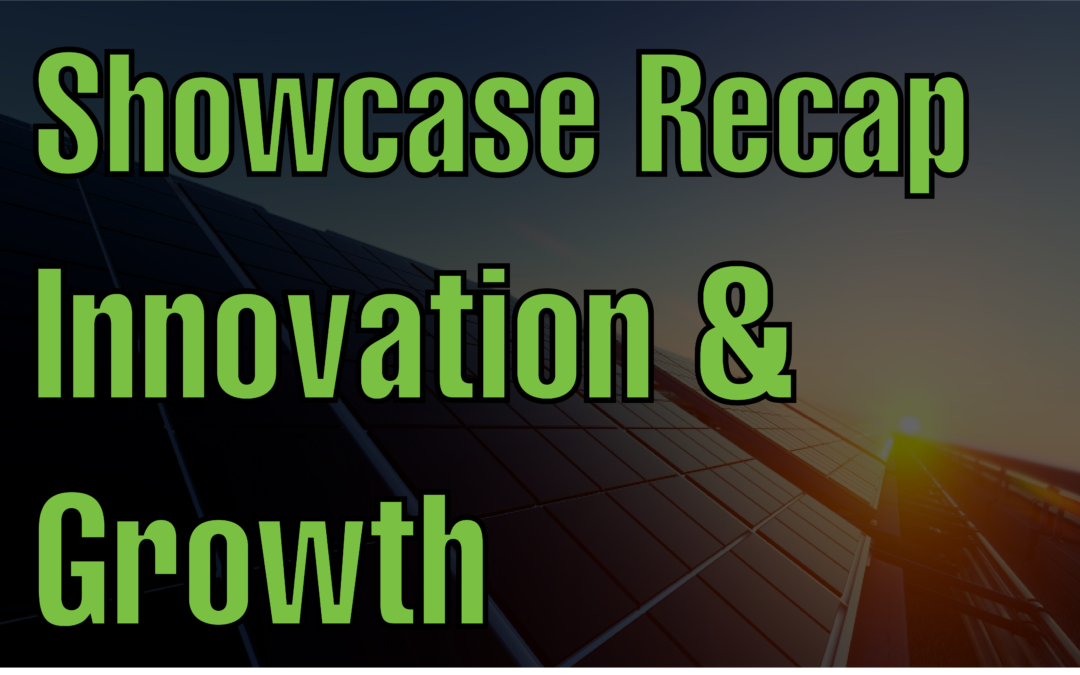 We had ten regional cleantech companies step up to the plate and offer new products to fill the “innovation challenge” in SMUD’s plan to reach a carbon-free power supply by 2030 at our virtual Showcase.  Over 160 people were watching online.  Here are the highlights.

Paul Lau, SMUD CEO and General Manager, opened with a presentation of the bold Zero Carbon Plan and what it will mean and what it will require.  That vision is driving SMUD to move faster than ever to replace and repurpose its existing assets to become a clean power city.  He sees the need for 3000 MWs of renewables and storage.  Paul showed how they are starting from a really good position, with rates far below the adjacent utilities and pledging to keep rate increases below the rate of inflation and to assure community well-being at the same time.  Of most interest was his acknowledgement that beyond accelerating all the steps they can see now, there is still a role for innovations to fill in a 10% “gap” in the plan—and SMUD is inviting everyone with a good idea to show them how they can meet this challenge and more.  He said SMUD is willing to devote $2 billion to new technologies to be sure to meet the goal by 2030.

CleanStart Executive Director Thomas Hall then presented the results of our latest survey of our local cleantech hub with some surprising conclusions.  Our hub of core, scalable cleantech companies has now reached a level of 9,900 jobs and $4.1 billion in revenue contributed by 107 companies, up from 85 companies in our 2018 survey.  More importantly we now have companies that have grown from an idea to “unicorn” status with a market value over $1 billion and have raised $1.95 billion in funding in the past three years.  We have gotten on the radar of cleantech investors worldwide.  That is no exaggeration, as huge international companies and investment funds have put money here.  And this is a great time for cleantech investment, as record amounts of investment are being made, valuations are at all-time highs, and VCs are pumping money in faster than ever.  The time is ripe for more innovations to make it to market.

Among those pursuing innovations, the ten companies at the Showcase impressed the crowd with novel new products that could more than fill the 10% challenge gap.  Here are their “a-ha” moments from innovators that can cut the electricity consumption or add to the supply:

Rick Wylie of Villara Building Systems and Villara Energy, showed two new products they have developed themselves and will be marketing widely—(1) a dual-use air-source heat pump that provides not only space heating and cooling, but also is a water heater, and (2) a home energy storage device based on remarkable new lithium titanate batteries that have longer life and better performance than anything else on the market.

Sergey Vasylyev of Lucent Optics showed off his lightweight, simple drop-in LED replacement for fluorescent lights in buildings, cutting total energy use by 10% or more.  Just pop-out the old fluorescent tubes, plug the  thin replacement panel into the existing plug in the fixture and slip it into the same slot as the old diffuser.  It is fast and easy.

Bob Guimarin of Off the Wall Energy (gotta love that name) showed how renters and people that can’t afford the expense of big solar panels and Tesla power walls can still take advantage of the rate incentives to contribute to zero carbon and save themselves money at the same time.  Bob showed a simple battery storage device that looked like a big Roomba robot in the shape of a hexagon. It can go anywhere—on the floor, on a countertop, or on a table. It plugs in between an outlet and a big energy using device like a refrigerator or a home entertainment center.  It recharges when power is cheap, and shuts off the power from the outlet when power is costly, keeping the connected device running, all without the owner even knowing it is happening.  It can provide basic back up power in case of an outage and it can easily be moved around to provide power where it is needed in an outage.  It is perfect for renters because they can take it with them.

Diana Eastman, inventor of ThermēShade, showed how her device can dramatically cut energy losses through windows while preserving the view.  Most people think you need dense-weave, heavy curtains to do this.  Not so.  You can hardly tell ThermēShade is even there.  Diana showed several pictures of actual installation that demonstrated this.

Jerremy Spillman talked about his company provides AI software to take over the job of making existing building energy management systems work optimally, just like having an onsite energy engineer.  They even named the company and the product “Hank”, to make that point clear.  Building owners that have spent tens of thousands of dollars to install fancy new systems to save energy often find out that over time tenants defeat the systems or no one remembers how to adjust it to make the building comfortable.  Hank steps in to learn how the system works, then tweak it to achieve the best results.  Savings could be over 20% in energy use.

On the supply side, Kevin Wolf, CEO of WindHarvest International, showed his vertical axis wind turbine that harvests more of the wind available on a site that what the big blade horizontal axis turbines can do.  He showed that SMUD could add 5,000 MW on sites it has around the county and in Suisun, all with equipment which is quick and easy to install at ground level, not way up in the air.

Ezra Beeman showed how his Electrabank home energy storage device combines several separate devices on homes with solar and communicates with the utility grid to give homeowners the most bang for their bucks.  He has contracts for thousands of new units to be installed, with early customers raving about the unit.

Drew Smith with Smarter Grid Solutions showed how economical microgrids even as small as having 500 kW of connected load can be important “virtual power plants” for the utility.  His parent company already has a substantial battery energy storage system in SMUD’s system, and it could be used as the anchor for a microgrid in the adjacent neighborhood to amplify its usefulness to the utility.

Doug Alfaro of Wallbox Chargers talked about how they are ready to go with bidirectional EV chargers that allow a vehicle to become part of the storage network for the grid and backup for the home.  Most importantly Wallbox has most of the major EV manufacturers on-board with using their vehicles in this way, a step that has been a big hurdle before.

Jon Fortune of Swell Energy showed how their software can get the most benefit out of solar, storage, and EV charging for the homeowner and for the network.  They have a partnership with Enphase Energy that bought local EV charging company Clipper Creek in Chico.  They are all about providing load flexibility that is invisible to customers but is vital to matching variable renewable supplies to managed loads to avoid any blackouts.

It was 2.5 hours packed with new ideas.  As one attendee noted, she was taking notes on all this great stuff as fast as possible.  There was so much covered in this Showcase that we will be having a follow-up session on this Showcase to explore more of what our local innovators can do.