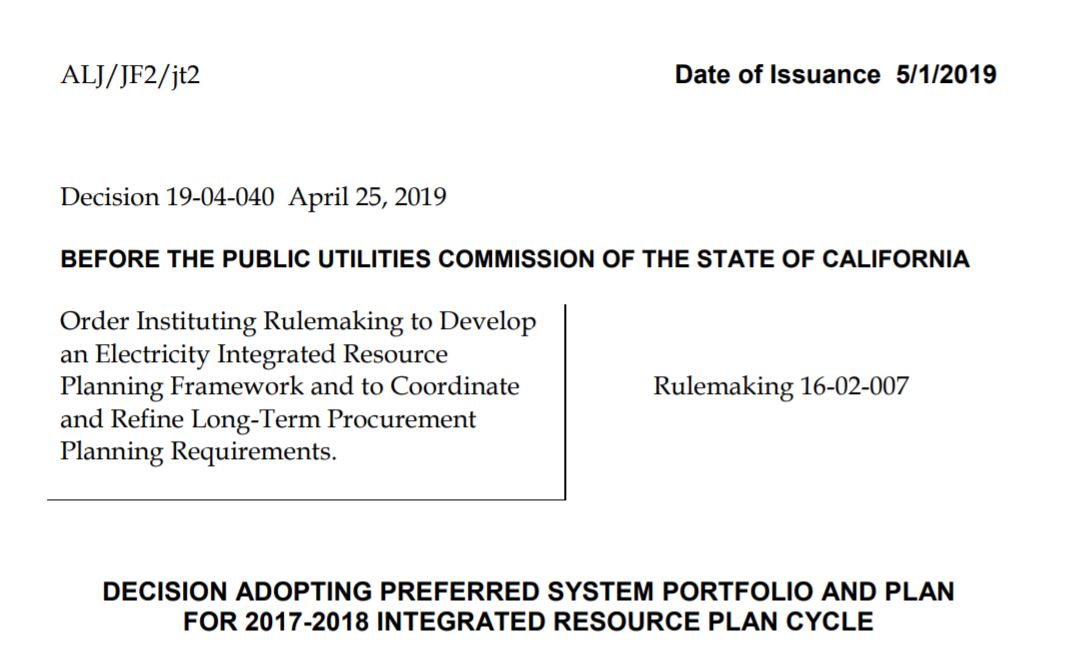 In a decision published May 1, the CPUC has approved an Integrated Resource Plan (IRP) to guide the purchasing of new power supplies over the next ten years.  In total, the plan calls for nearly 12,000 MW of new renewable and storage resources, with some big surprises as to the specific quantities and types of those resources.  This is a plan, not a mandate, but purchasers are well-advised to heed the guidance of the CPUC.

What began almost 50 years ago as a simple process at the CPUC to ensure the investor-owned utilities were coming up with a Least Cost Plan to add new generation to meet load has incrementally gotten more expansive and vastly more complicated.  All 49 Load-Serving Entities in the state, whether they are investor-owned utilities, municipal utilities, community choice aggregators, or energy service providers that serve customers directly, now must file plans every two years to ensure their plans are optimal and harmonized to achieve a long list of objectives.  At the top of the list is achieving the goal of SB 350 to bring GHG emissions of the power sector 40% below the level of 1990 by 2030, and the goal of SB 100 to have 60% of all power come from renewable sources by 2030. Both of these goals must then be met while assuring reliable power, with enough flexibility to ramp up and down as power supplies and load fluctuate, with enough in reserve to meet unexpected conditions, and all at least economic cost.  It is a massive computer modeling exercise.

The results are summarized in the following table.

This decision creates some clear winners and losers in the game to sell power projects.  For some, it’s a gold rush. But for others, not so much.

If you have a product for storing energy that can be delivered quickly over one hour, you got a big boost in your potential market—to over 2000 MW from the 90 MW the LSEs wanted.  On the other hand, if you have a technology to provide power from storage over a longer time frame, your sales strategy got much more difficult.  Why the shift? To know for sure, one would have to tear into the mounds of details in the assumptions in the computer model. A good guess is that 4-hour storage didn’t provide enough ability to ramp up quickly at an acceptable price.  Disagree? Catch the next train because the planning cycle is about to begin all over again, leading to a new decision on a ten-year plan in 2021. Make your case. Or sell your 4-hour technology to a customer and install it on-site.

If you are a developer of solar and wind projects, you might be a little disappointed. Each were cut about 1000 MW.  But still, there’s 7,000 MW to be sold. Some good news: The decision explicitly provides for purchasing power from these sources on a schedule that maximizes the opportunity to qualify for the remaining terms of the Investment Tax Credit and the Production Tax Credit for renewables.  LSEs are allowed to buy in advance of immediate need.

If you have a great biomass project, bummer, you got a goose egg.  Find a customer to buy your project and use it directly.  Don’t try to sell the power from your own project to a user, because that makes you an LSE and, congratulations, you will have to file and be a part of the next two-year cycle.

If you are a geothermal developer, jump for joy!  Your potential market just got a 5X boost.  Get the drilling rigs lined up fast before your competitors do.  Again, it is hard to tell why the results so heavily favor geothermal, but it is likely because it is the one fresh source of carbon-free baseload power that is out there.  Adding 1700 MW would boost the total installed capacity of geothermal in California by 62%. That’s a lot in ten years. There’s a pretty good chance making this decision public will affect the price of geothermal power contracts.  It will be interesting to see how that affects the 2021 IRP decision.

If you develop natural gas-fired projects, you didn’t even make the list.  The decision assumed no new projects and the shutdown of once-through cooled power plants as they reach 40 years of age.  It is assumed the younger plants still operate and provide a great deal of the ramping and reserve capacity. So, this decision will favor on-site cogeneration as the target for developers of natural gas projects.

Another big implication of the decision is that the buyers of power are not going to be the traditional utilities, but will be the Community Choice Aggregators.  The twenty CCAs participating in this process would end up being the buyers of 90% of the 12,000 MW authorized.  That is a much different prospect than the way this has been happened before.  The traditional utilities may in fact be trying to shed some of the power purchase contracts they already have.  To avoid this becoming a circus, the CCAs will likely try to come up with a few that will buy for everyone else in order to get the best deals.  Watch for that how that process happens. It is likely already underway. But for a time, it will be difficult to know with whom to negotiate your power deal.  There are many that doubt the CCAs can pull this off, and want there to be a back-up buyer. The CPUC will be smack in the middle of that controversy as well.

This process has been going on for a long time, but in the background.  Now the race has begun. Try not to get trampled.

If you want to read the whole decision, it is here.