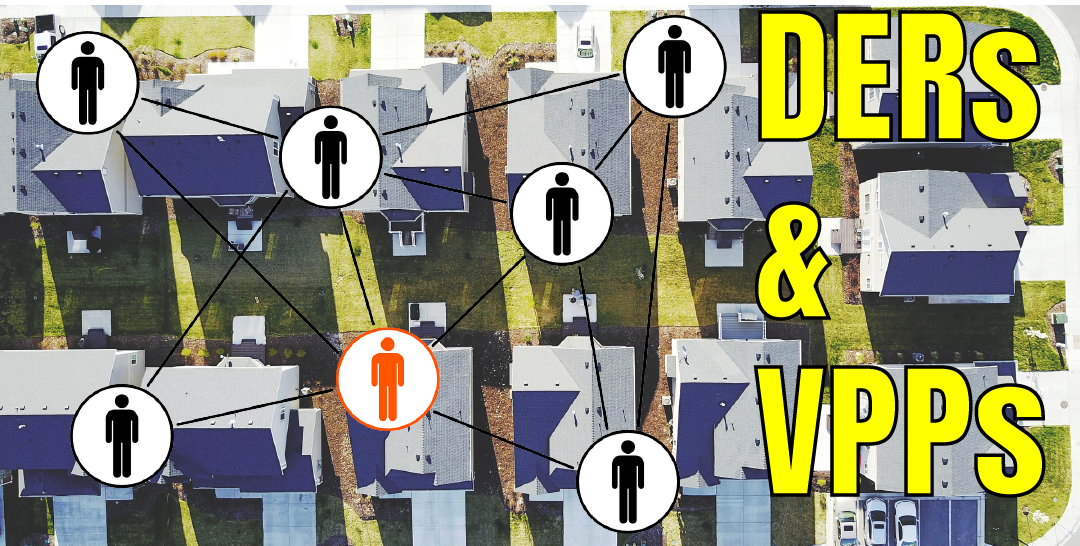 As the thinking about the power grid of the future continues to evolve, there is no topic hotter than how best to use assets owned by customers and spread over the entire network in the thousands.  Coordinating, controlling, and making these resources reliable enough to use them to meet an increasing share of power needs are now the focus of many startups and established players alike.  The industry talks about these as Distributed Energy Resource Managements Systems (DERMS), Virtual Power Plants (VPPs) and Microgrids (MG).  Technology is rapidly blurring the distinctions among these terms.  Whatever it is called, the idea is blending solar panels, batteries, controllable thermostats, refrigerators and backup generators into a system not designed for this purpose without a big problem, while saving everyone money.  It could involve centralized control or, even better, using AI-based learning to create a self-managing, self-healing system.  Lots of room for innovation.  It’s a big challenge, with a big upside for those who can rise to meet it.

At our February 24 MeetUp, we had presentations from SMUD and solar pioneer SunRun on how they are addressing this challenge locally.  A recording of the event is available HERE.

Jillian Rich, a strategic business planner at SMUD, explained that SMUD is already wading into this challenge with a load flexibility portfolio, creating new VPPs, and announcing new incentives for battery storage.  SMUD calls this program “My Energy Optimizer” and they will roll it out in stages.  The first involves placing controllable thermostats in customer homes using Uplight, a Boulder, CO, company with 400 employees that helps 80 utilities nationwide to implement these types of programs.  Participating customer will receive incentives to allow the utility to increase the temperature in their homes for a few minutes and not more than 50 times per year to shed load on command.  In the second stage which was just announced, SMUD will provide cash incentives for customers to help support the grid.  There will be three levels of participation.  “Starter” participants will receive $500 to use their stored energy to replace grid-delivered power at times of high prices.  “Partner” participants will get $1,500 to get all the “Starter” benefits, plus let SMUD use their batteries to reduce the power draw of the home when the grid is stressed.  “Partner-Plus” participants will get $2,500 and all the “Starter” benefits plus will allow SMUD to make them part of a VPP aggregate to share their battery with other customers, achieving a larger localized help to SMUD.  In the third stage expected by 2024, SMUD will be looking for ways to involve EV chargers to provide 2-way power flow and use car batteries as part of the stored energy resource for the grid.

Success for SMUD will come if it can count on about these customer resources to provide about 5% (estimating off her graph) of the capacity needed to balance the system by 2030.

Carl Lenox, SunRun Senior Director for Electrification and Advanced Products, noted that his company sees a huge growth opportunity in this area.  Founded in 2007, SunRun is active in 22 states plus DC, with 360,000 residential customers.  It has been aggregating customer resources since at least 2019 when it conducted a case study paid for by DOE of about 10,000 customers in New England that they managed and created a capacity resource available to the regional ISO.  New England was one of the first regions to try to use an aggregator-intermediary to create resources to support the grid, starting in the 1990s.  Those early efforts exposed how difficult it was to use these “behind-the-meter” resources to provide capacity the grid could rely upon.  Much has been learned since, and now the results are better.

Carl also noted that SunRun wants to have a premier spot in V2G technology, starting with its recently announced arrangement with Ford to provide this technology to couple the F-150 Lightning e-truck to the home.  Ford has gotten 150,000 pre-orders in just three weeks.  The vehicle first could provide backup to the home with a 130 kWh capacity battery pack that could transfer as much as 9.6 kW at a time, enough to run and entire home.  SunRun will start with Vehicle to Home (V2H) technology, initially for backup and then as a way to manage use to reduce a homeowner’s power bill.  This will give them a foothold to move to full V2G with more experience.

With billions of dollars pouring into companies offering new technology in this area, it is one ripe for clever innovators to apply their creativity.