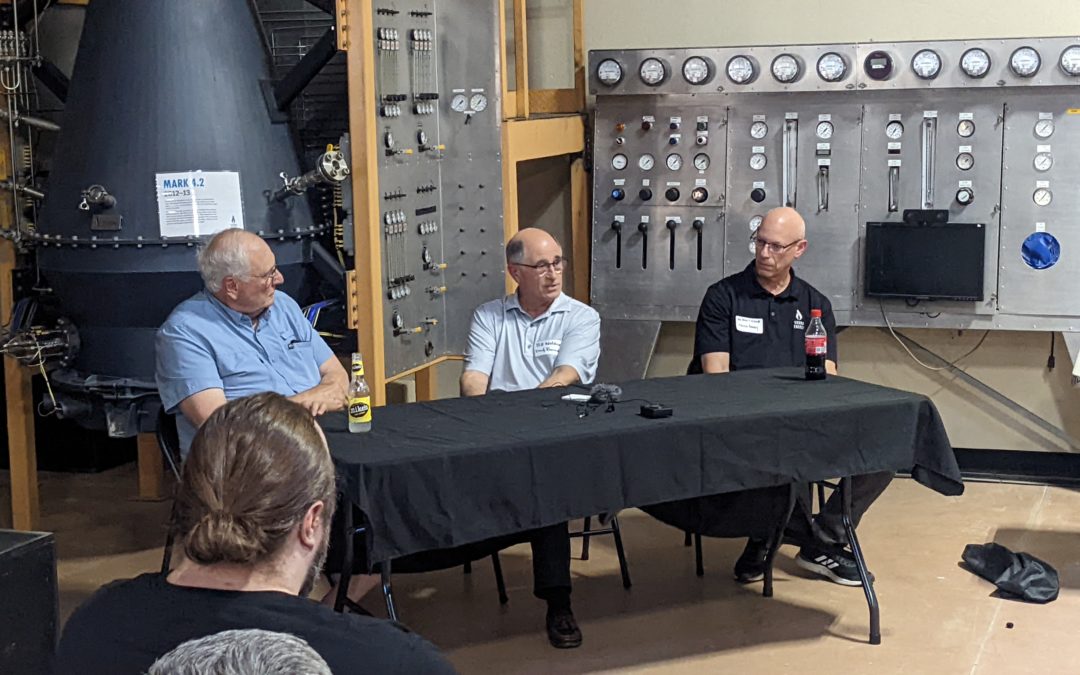 On June 2, we gathered for our second post-pandemic in-person MeetUp in Davis to hear from two companies that have spent two decades in innovating systems to convert wastes to energy products profitably.

First up, Michael Kleist, VP of Business Development, took us through the latest status of Sierra Energy’s FastOx waste gasifier development.  Sierra has been developing this process for two decades.  They achieved a major milestone in building a test facility at the 165,000-acre Fort Hunter Liggett in Monterey County and commissioning it in 2019.  It is now processing 10 tons of waste per day.  Sierra is using this plant to do test runs of various wastes in order to learn what it needs to improve or adapt to handle this variation.  The plan is to perfect a design for a 100-ton per day commercial unit.  Sierra got an investment from Breakthrough Energy Ventures to make the completion and operation of this unit possible.  It is now seeking another investment round to move up to offer the larger plant.  The FastOx process is a high temperature destruction of wastes using pure oxygen to avoid complications of using air (which is 80% nitrogen) and to provide the high temperatures it requires.  The offtake streams demonstrated on the plant include a hydrogen rich synthesis gas (that can be made into methane, methanol, or even gasoline and diesel), purified hydrogen, and non-leachable solidified slag and stone (nothing that would be toxic).  No ash would be produced.  Other advantages of FastOx are its avoidance of moving parts, using an updraft fixed bed, control of tar formation, a very high yield of synthesis gas, and ability to run on heterogeneous post-recycle mixed waste and even RDF.

Next, Bill Walden of Trinity Renewable Technologies explained its new anaerobic digestion process.  In contrast to the thermochemical approach of FastOx, the Trinity process occurs at much lower temperatures and relies on biological processes.  The goal for Trinity was to be able to convert the material in organic waste that has the highest energy potential—the lignicellulose.  Most anaerobic processes cannot deal with the lignin fraction, and convert only the cellulose.  Trinity obtains rights to use an extremely thermophilic microbe discovered in Russia that breaks down the lignin very efficiently.  The Trinity system actually uses to reaction vessels, one operating at high temperature for the pretreatment of the lignicellulose, then a more conventional digester that operates at a more moderate temperature and uses an “induced bed reactor.”  (Although Bill did not reveal the exact temps, my guess is that “high” means 190-210°F, and “moderate” means 130-150°F which is common in digesters.)  The result is the near complete destruction of all the solids in the waste, very unusual for a digester system.  The products of the digestion are methane with a few other sulfur-rich gases, carbon dioxide, and an inorganic nutrient-rich irrigation water.

The target customer for Trinity is a dairy which typically digests only the wash water coming out of the milking barns to generate methane.  The leftover manure is usually just stacked up and left to compost, unfortunately releasing fugitive methane.  The value of the Trinity system is that it can increase the captured methane yield by a factor of 2-4, according to Bill.  He said they are close to some deals for building systems in the dairylands of Wisconsin.

In the discussion which followed, we talked about the impact of low-carbon fuel rules on the market prices for products of these two very different processes.  (We had a discussion specifically on these rules last September and you can look there for a better understanding of them.)  Unfortunately, the existing rules and calculation methods under the Low Carbon Fuel Standard in California do not yield a very good result for FastOx.  The gas produced is not considered to have a relatively low Carbon Intensity Score, even though there clearly is a fraction in the waste of organic material that should be treated favorably.  Sierra’s response has been to focus on customers who do not care about the California score—customers overseas or customers who simply want to avoid landfilling their waste.  Sierra has found so many potential customers of this type that it sees a bright future for its upcoming 100 ton per day commercial system.

Trinity has been hit with another quirk in the California system which ends up penalizing dairies for producing methane from the unconverted solid waste fractions, which seems upside down from what was intended.  In all likelihood, the Trinity system will be most attractive if the output can be sold with a substantial California credit.  That credit system applies, even if the methane produced is far from the borders of California.  Bill mentioned effort underway to correct the calculation method through legislation to remove the “quirk” that penalizes anyone trying to do a better job of methane capture at dairies.

From this discussion it seems some fresh ideas on dealing with wastes are about to bear fruit.  It’s only taken two decades.

Be sure to join us for a future monthly MeetUp in the evening and keep an eye on the upcoming schedule for our Perspectives podcast held several times per month in the morning. 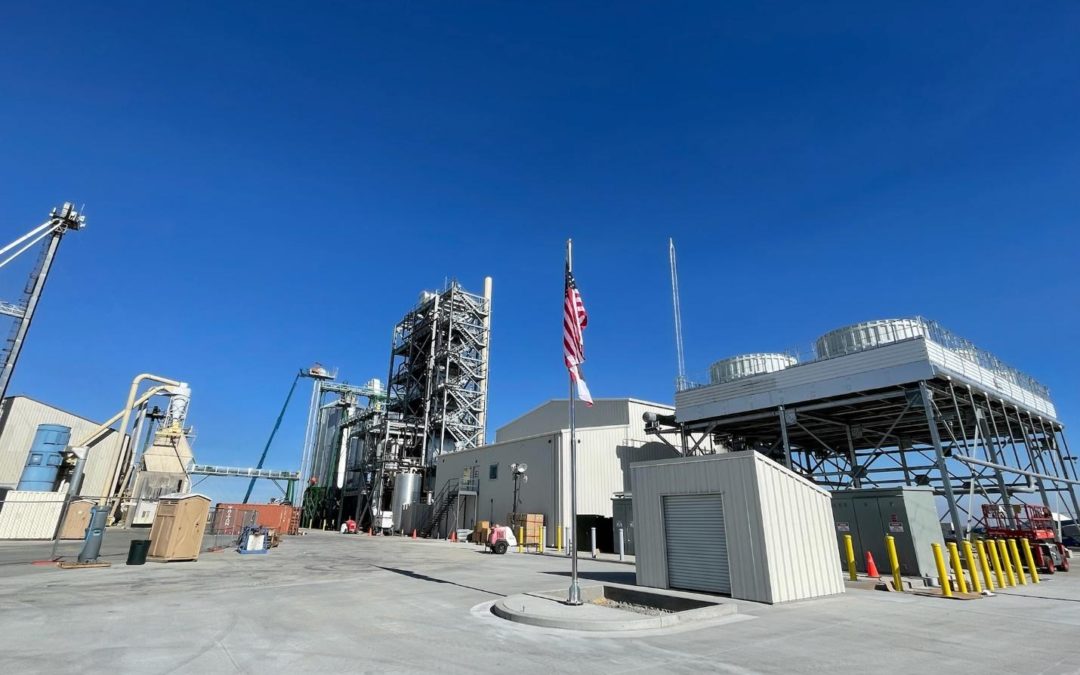 After more than 15 years of R&D, West Biofuels (WBF) in Woodland is building its first two commercial scale plants to convert agricultural and forestry residues into electricity.  It has plans to develop many more as these first two prove their commercial viability and as they widen the number of valuable products they could produce.  We recently sat down with COO Dr. Matt Summers to get the details on what has been happening.

WBF has been getting increased attention because of its focus on conversion of forestry thinnings to valuable energy products. California wildfires of the last half-decade have made the need to manage forest by thinning the underbrush and deal with the damaged timber much more urgent.  WBF began with some research and development to build a “process development unit” that would allow them to study various configurations and approaches to deal with a variety of urban, orchard, ag and forest biomass available in California.  The original idea was to convert these underutilized resources efficiently into a bio-syngas containing a mixture of hydrogen, carbon monoxide, carbon dioxide, and methane that could fuel a reciprocating engine-generator to make electricity.  While that looked simple and achievable on paper, West Biofuels had to adjust their approach due to costs and the marketplace.  The prices utilities were willing to pay for power from renewable sources were falling and, as many have encountered, feeding an engine with bio-syngas was hard on the engine requiring high maintenance costs.

Then, two things changed that put WBF on the road to a commercial unit.  First, they switched to using a different technology for power production.  They now use an indirect-fired power generator—an organic Rankine cycle (ORC) system.  In an ORC system, heat generated from the biomass is used to expand an organic working fluid through a turbine and is recondensed to continue the cycle.  It is a closed loop system without any waste streams.  It can be slightly less efficient than feeding bio-syngas to an internal combustion engine, but the savings in maintenance more than justify the switch.

Second, in a moment of foresight the California Legislature passed the Bioenergy Market Adjusting Tariff (BioMAT) law requiring utilities to pay a very favorable fixed price for electricity derived from biomass in small generators less than 3 MW in size up to an aggregate of 250 MW (Public Utilities Code § 399.20).  For the Investor-Owned Utility companies (IOUs), this Feed-In Tariff (FIT) allows a project to enter a fixed contract to become part of the IOU renewable energy portfolio. Electricity generated as part of the BioMAT program counts towards the utilities’ renewable and resource adequacy targets.  Small-scale bioenergy projects can be procured in three categories with allocations and prices set by the CPUC:

Table 1. BioMAT Allocation Summary in 2021 as reported in Annual RPS Report by CPUC

These fixed prices are higher than what power from solar and wind farms receive through their current incentives.  BioMAT is a is an opportunity to boost these favored forms of biomass-to-energy in California to help establish a more mature marketplace similar to solar and wind.

With these two changes, WBF has moved to market a 3 MW scale biomass-to-electricity within California with a plan to drive down costs over time, add more technology, and open up a wider market.  WBF has signed contracts with two entities to build these plants.  One is finishing construction in Williams and will use rice hulls as a feedstock.  Another is near Burney in Shasta County, with forestry residue feedstock), and is starting construction this spring.  The Burney plant also has the option of  producing as much as 6,000 tons/year of biochar, used for filtration, as a soil amendment or an asphalt additive  as an additional source of revenue.  Now WBF is seeking financing and investment to support another half-dozen similar plants while there is still headroom under the 250 MW cap on BioMAT projects.

Knowing that the California BioMAT program will sunset in 2026, WBF is continuing to see what would widen its customer appeal.  The  research continues and the process development unit has gotten much bigger.  The technology push now is to feed the synthesis gas to a catalyst bed to create liquid chemicals and fuels.  These products generally have a higher value than electricity outside of the BioMAT market, improving the economics of the process.  WBF is looking at two catalyst paths.  The first pathway generates an output on mixed alcohols and methane.  WBF has found that it can make a product stream that has half the energy in the mixed alcohols and half in the methane product.The alcohols include butanol, n-propanol , and ethanol.  All three have good commercial markets, especially the n-propanol which is used as a solvent for inks as in ink-jet printers.  The methane product is sent to the utility pipelines as renewable natural gas to be used by industrial, residential and transportation customers in place of fossil natural gas..

The second approach is to produce jet fuel and diesel through a Fischer-Tropsch-type catalyst system.  These types of catalysts convert syngas into straight chained hydrocarbons of various densities from light gasses to heavy waxes.  For WBF,  a portion of the feedstock energy  (20-30%) converts directly into jet fuel and diesel.  There is a substantial quantity of waxes as well, plus light gases that would go to generate power for the process.  The objective of the current WBF research  is to figure out how to increase the yield of the jet fuel/diesel fraction and to explore how the waxes could be used in a standard oil refinery to increase the renewable content of motor fuels or lube oils, possibly by using spare Fluidized-bed Catalytic Cracking (FCC) capacity.  Adding a renewable feedstock to the refinery would help lower the carbon footprint of the fuel it produces to meet California’s Low Carbon Fuel Standard targets.   The vision is for these advanced WBF plants making chemicals and renewable fuel products to be economical beyond  the expiration of the BioMAT program.

Matt has always wanted to get to the point where they were building dozens of plants and making a real impact.  With these first two plants, he is excited to see that dream starting to become real even though it took fifteen years.  Meanwhile, the research and development continues to make the next generation of biomass technologies.