We Hopped Aboard a Tuk-Tuk, Then Heard the StartUp Weekend Teams 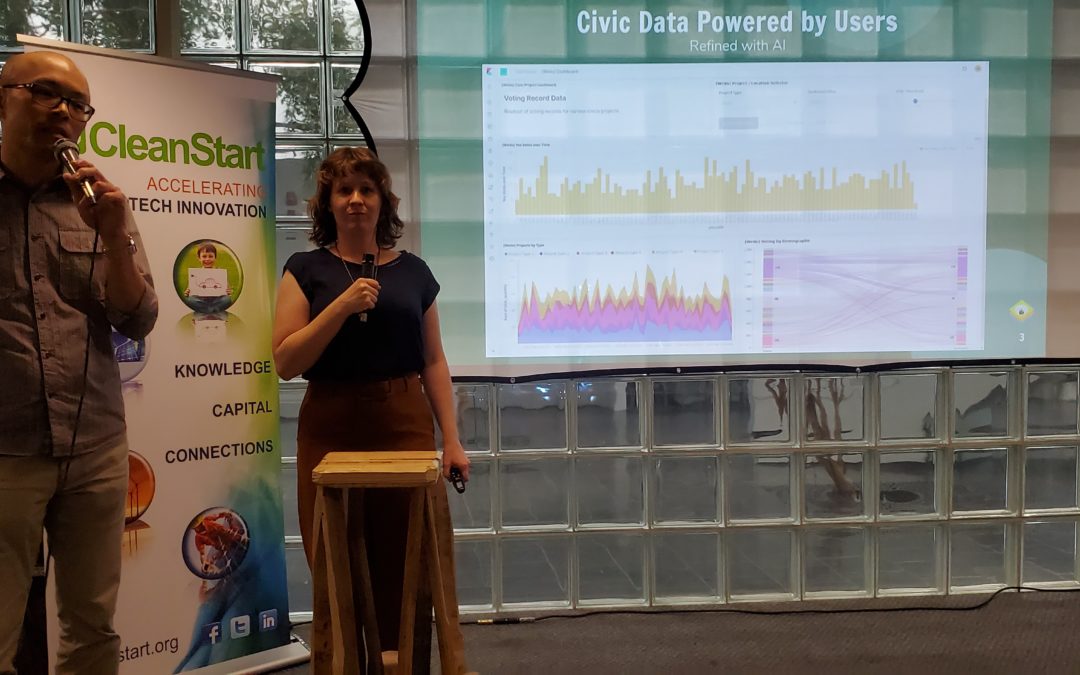 On June 27, we had the last MeetUp before taking the summer break.  We will be back in September. It was a fun evening. First, Manushi Weerasinghe gave rides in her all-electric, three-wheeled tuk-tuk.   She has started a business to provide an alternative to provide short rides in the downtown area, focusing first on giving tours. Tuk-tuks are common in Southeast Asia and originally were powered with a small one-cylinder gasoline engine.  The name came from the sound of the engine. Now Manushi’s is silent. It holds six passengers. At this point she doesn’t have permission to provide a lift like a taxi, she is only licensed as a tour operator, but she is working on it. The tours sounded great—the Lady Bird tour (about the making of the movie), and the Wide Open Walls tour of the murals, for example.  She would like to have a fleet of five electric tuk-tuks roaming the area, and is crowdfunding to get support. She has raised 30% of her $15,000 goal. You can check her out at https://www.capitaltuktuk.com/.  Manushi is both an Aggie (BA in Psychology from UCD) and a Hornet (Masters in MFT Counseling from Sac State).

After zipping around the block in the tuk-tuk, people came back to hear pitches from 4 of the teams from the Sustainability StartUp weekend that ended on June 23.  Even in 4 days the pitches continued to involve. The team from Energy Park in fact had gotten a meeting in the Mayor’s Office and were encouraged to put some more details together for an actual renewable energy installation in a planned park in Aggie Square.  They want to put up solar PVs that look like trees with big leaves as well as exercise gear that can harvest power from cycling, jumping, and play. Then WeVo talked about eliminating a lot of paperwork with their platform to collect community input on development projects with their voting app.  Zinder next described their app to connect isolated seniors with more community activities, getting them healthier. Finally eeBox described a product to replace a lot of the one-use cardboard boxes now so ubiquitous with deliveries from Amazon and others, with a more durable reusable box that could be collected by the same delivery vans.  Amazing creativity from 54-hours of work.

If you have started a business or are thinking of it, please take a look at signing up for our CEO Crash Course Aug. 16, 23, and Sept. 6.  It is free and a great way to get on the right track. Apply here!

Look for our announcement of the next MeetUp.  It is scheduled for September 26th. We hope to see you there.