Lots of Energy was Generated at our June CleanTech Meetup 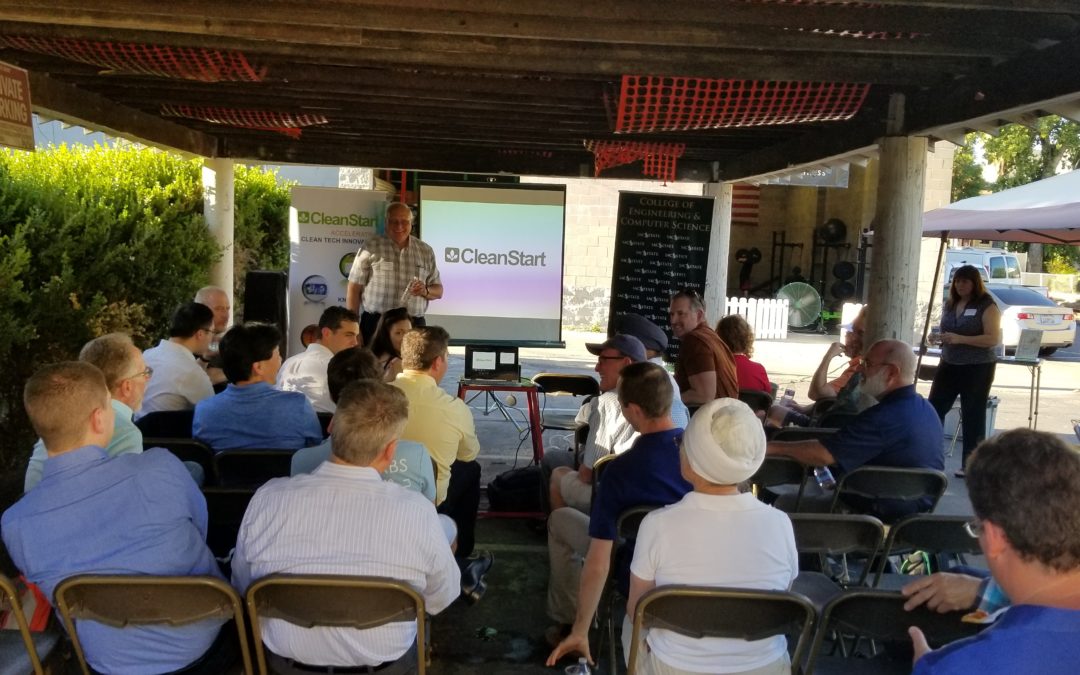 Our  June 21 meetup, held at EcoFitness Gym in Midtown, was something of a Summer Solstice party! We celebrated both the longest day of the year AND the exciting things local companies are doing in the area of energy generation.  EcoFitness Gym is the brainchild of Jose Alvina, a Marine who with colleagues hatched a scheme to recover energy from workout equipment in a Forward Operating Base in Iraq to keep batteries charged to power various devices, as a backup to generators which broke down often.  EcoFitness has a handful of exercise cycles that incorporate small generato

rs which provide resistance for workouts, harvesting the kinetic energy as kilowatt-hours. This power is fed into storage batteries and offsets part of the electricity requirements for the gym itself.  As Jose explained, this is only one way the gym is trying to be green. A focus on recycling, health, and energy efficiency provides more opportunities. While not all the equipment at the gym is set up to harvest the energy from exercising, Jose has a vision for other ways to do so in the future.  The gym is in an alley between 18th and 19th Streets and L and M Streets. It is right behind Mulvaney’s if you are trying to find it.

Anthony Ng and Erik Stokes from the California Energy Commission also spoke.  Anthony outlined the CalSEED and EPIC programs of the CEC. Erik reviewed the evaluations the Commission is doing on piezoelectric devices to harvest energy from applying pressure to certain crystal materials that convert that into electricity.  The CEC currently has two research contracts underway. One is looking at putting piezoelectric under roadways, using the normal compression from traffic to generate electricity. The research will evaluate whether a half mile of roadway would produce enough to power 5,000 homes.  The second contract is looking into smaller uses of piezoelectric.

Finally, Mike Carroll, CEO of HeliosAltas, showed us the progress he has made on his small hydroelectric generators.  He is targeting generator sizes in the 5 to 75 kW range with his unique undershot waterwheel system that installs in existing canals and conduits.  The target for these products are remote areas away from any grids, mostly in developing countries. HeliosAltas has managed to reduce costs for its units by about 75% while doubling the efficiency.  Mike said they have a great deal of interest from overseas customers and are partnering with an established company that will manufacture, sell and install the product. One test unit has now been operating trouble-free for over two years in the Philippines.  You will likely hear much more about this company in the future.

Attendance at this meetup set a new record again.  We hope more can join us for future ones. The next one is planned for September and the focus will be solar companies.  Please invite friends to come to it. We love the momentum. Let’s keep it growing!

We are taking July and August off as far as Meetups go but we are doing other events.  We will be participating in the Startup Summer Party on July 17 at The Urban Hive, headed up by Startup Grind, one of CleanStart’s partners.  Last year over 300 people attended. There will be startup demo booths (available for $50 if you want one), lots of good food and live music. More info available here.   You are also invited to join us at the next Sacramento Green Drinks on July 10, an informal social event for all interested in greening up the region.  We are planning to have it at Hot Italian at 16th and Q Streets, but watch for the official announcement. We hope to have one on every first Tuesday of each month.